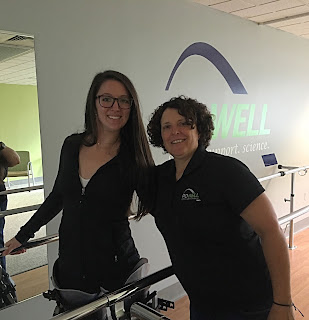 Four years ago, Taylor Roberts, then a sophomore at VCU, was driving just a mile from her parents’ house in Powhatan when another vehicle rammed into hers, pushing her into a telephone pole.
She suffered compression fractures in her lower spine – an injury that, for many, could lead to a lifetime in a wheelchair.
But Taylor had other ideas. Upon the start of her out-patient rehab, she began working with Powell’s Beth Martin, a certified orthotist, on what would become an amazing recovery.
“Without Powell, I wouldn’t be where I am today,” Taylor says. “It’s crazy how much a good support system can do not only mentally, but also physically.”
Taylor started her recovery in a back brace following two spinal fusion surgeries. Once cleared of her restrictions, should would take her first steps since the accident in a reciprocating gait orthosis (RGO) brace that Powell made for her.
Providing the necessary stability she needed at her hips, she used this brace for several months before progressing to long leg braces, known as KFOs. Taylor would be using these braces for the long haul.
It wasn’t until she participated in a clinical trial using a powered walking device called the “Indego exoskeleton” that she would progress into the next phase of learning how to walk again. After the trial, Taylor began progressing into ankle braces with the help of physical therapy and the support of Beth and the Powell team.
“Statistically I was not likely to regain the function of walking,” Taylor says. “The prognosis was a wheelchair.”
Now, with the help of technology, she’s about to take a big step.
Enter the C-Brace
New technology is revolutionizing the capabilities of orthotics and prostheses. Taylor is a candidate for the C-Brace, a computer-controlled knee, ankle and foot orthosis manufactured by Ottobock that combines mechatronics (mechanical, electronic, computer, and systems design engineering) with custom orthotics to help people walk.
The C-Brace opens up entirely new possibilities for users with its microprocessor sensor technology. Flexing under load while sitting down, navigating slopes, walking on uneven terrain, or going down stairs step over step, it can open a new level of mobility for those like Taylor.
Small and light, the C-Brace enables the user to wear the orthosis underneath clothing. The unit’s microprocessor sensor makes the entire gait pattern more dynamic and responsive.

“This is going to be a game-changer,” Taylor says. “It will make me independent again by walking and it could change a lot of people’s lives.”
She is working with Ottobock and Powell to become the first person with her type of injury to use the device. “It’s easier to use than you think,” Taylor says. “It’s significantly lighter and will fit snug against my legs.”
With an eye on mobility, Taylor reflects on her injury and the support from family, friends and Powell to keep her spirits up.
“There’s no way to prepare for an injury like this,” she says. “It changes everything. It was difficult to swallow the harsh pill of reality. But Beth was very encouraging and uplifting and will do what she can to help you achieve your goals.”
That includes finishing her degree at VCU. She’s studying journalism with hopes of possibly becoming an advocate for accessibility.
“I spend most of my time in Richmond and, like many cities, it’s just not accessible for wheelchairs,” Taylor says. “The thought of being able to independently get in and out of local businesses would be so liberating for me since I hate to draw attention to myself. Now I have a new outlook.”
And graduation in the near future.
Posted by Powell Orthotics and Prosthetics at 3:30 PM